The Thunderstruck series is, to Slots and gambling, what Nintendo's first GameBoy is to gambling or what the 1994 FIFA video game has been to countless breakups.

Start the game to play the Thunderstruck II Slot machine online. You can play for free with unlimited free credits (refresh the page when you run out of money) or for real money. If you choose real money play, use the welcome bonus for your first games!

Writing about the Thunderstruck II Slots feels like travelling back in time to an era when the computer screens where three-time the size, some of us didn't have a sound card to play the sound effects, and there was no chance to play mobile games.

Thunderstruck II, like the original Thunderstruck Slot game, are the Godfathers of Slots, some might say. They made history, and they kept so many players entertained that they are still alive and kicking also today.

Don't let the average look and retro sound effects of this game part of the Microgaming Slots family mislead you.

The Thunderstruck II Slots are still going strong because they play great and they feature some of the most popular bonus games in the Casino world.

Albeit not a progressive jackpot Slot, the Thunderstruck II game can pay some very rewarding wins when the symbols on the reels align to form the top winning combinations.

Whether you like to play free Slots or you don't care about bonus games, and you are all about playing this Slot for real money, this guide to the Thunderstruck II Slots has everything you need to get started. 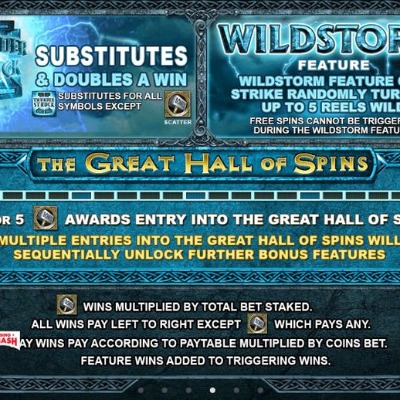 Enter the Great Hall of Spins!

Join Valkyrie, Loki, Odin and Thor in the Hall of Spins!

Register a free gaming account to play the most popular Slot in the world!

Let's start from the basics and explore the theme of the Thunderstruck II Slots.

If you think Vikings Slots and games based on Norse mythology are a new trend started by Irish-Canadian co-production Vikings TV series, you are wrong.

The original Thunderstruck and Thunderstruck II Slots pioneered the genre bringing troops of brave Scandinavian heroes to our screen when Michael Hirst was still busy exploring the history of the United Kingdom.

These are the games that brought to the screen Odin, Loki, Thor, the road to Valhalla, and even the Valkyries.

Dancing on the reels at the sound of a truly epic soundtrack, these symbols help you build winning combinations, trigger bonus rounds, and set the background for heroic missions in the cold North.

The gaming experience one gets while playing Thunderstruck II is not something many Slots can offer. And so are the wins, as this mid-variance game comes with a top win of 2,400,000 credits.

Since not everyone will be lucky enough to walk away 2,400,000 credits richer, here's the complete breakdown of all the winning combinations (and their respective payout) of the Thunderstruck II online Slot game.

The Thunderstruck logo is the wild symbol. Not only it helps you build winning combinations, but it also comes with an added 2x that multiplies everything you win through it.

The game's Scatter, which can appear anywhere on the reels, is Thor's Hammer. You only need two scatter symbols on an active payline to trigger a win.

The Wildstorm Feature will strike you as lighting. Because that's precisely what it is. When this particular feature is on, a wild storm forms on the screen and lightings will begin to hit the reels.

This is one storm to look forward to, as each time a bolt of lightning hits a row - it turns all the tiles on it into wilds.

The Wildstorm is a random feature, so you have no particular ways or combinations to trigger it. You can't predict the actions of Norse gods, after all.

The Great Hall of Spins

The bonus features included in the Thunderstruck II Slot don't stop at multipliers and wild storms. If you want to get some proper Walhalla action, you need to enter The Great Hall of Spins.

To enter the Great Hall of Spins, you need to land three or more scatter symbols on the reels.

This is where the magic happens and where you get to enjoy the best of Norse mythology.

In the first chamber of the Great Hall of Spins (first four times you trigger the feature), you meet Valkyrie.

She awards you with 10 free spins, each bearing a 5x multiplier.

You may re-trigger this feature four times. So, as you can imagine, the winnings can be heavenly.

But it's only the beginning.

When you trigger the feature for the fifth time and forward, you enter the Loki bonus.

If you land two scatters during the feature, you'll get one more free spin. If three scatters - two more spins; if four scatters - three spins and if five - four free spins.

You'll meet the Odin Bonus only if you're lucky enough to activate the Great Hall of Spins for at least ten times.

On the 10th trigger, he shows up and gives you 20 free spins with an activate Wild Raven Feature.

Two of Odin's Ravens will be landing on the symbols and turning them into multipliers. One raven brings 2x multiplier, another one 3x.

If they both decide to stand on the reels, you get a whopping 6x multiplier for your wins.

You can activate Thor Bonus spins by entering the Great Hall of Spins for the 15th time and forward.

You get 25 free spins with Rolling Reels feature.

What are the Rolling Reels?

Every time you consequently win, the multiplier increases. This way, during most of your wins, you'll have a 2x or 3x multiplier, but it can go all the way up to 5x, too.

The Thunderstruck II slot features 243 fixed paylines with bets that start from a minimum of 0.30 per spin.

Those with the deepest pockets or who like to splurge when they play the free version of the Thunderstruck II demo online can go all the way up to 15 per spin.

Once you know whether you want to play Thunderstruck II for real money, for free, or with a bonus, open the game and select your bet size.

The winnings in the paytable are shown in coins. For example, five Thor symbols on a payline awards you win 500 coins.

Your coin size will determine what that will mean in the real money currencies.

Of course, that's if you bet 1 coin every spin. But you can also bet 2, 3, or more coins (up to 10) every spin. It multiplies the winnings accordingly.

One 0.01-value coin is equal to 0.30 of real money. Essentially, each time you increase the coin value or how many coins you bet per spin, you double your bet.

And you double your potential winnings.

When your bet size suits your bankroll, go ahead and press Spin. The Norse gods will flood your reels and decide the fate of your wager. 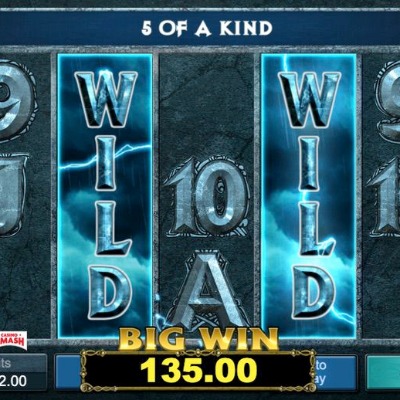 Join the Norse gods in a Slot adventure like no other.

Register a free gaming account and use the welcome bonus to start with the game!

Mahjong Exchange: the Only Online Mahjong Game that Matters

Top Free Slots to Play with No Download and No Registration

Subscribe to our newsletter list and get the latest casino news, strategies and special offers sent directly to your inbox!