The Difference Between American and European Roulette

Roulette is a simple game, you might think.
The dealer spins the Roulette wheel and you either win or lose. Depending on your luck.

While Roulette might seem like a random game, your success depends on a number of variables that you need to keep in mind. All the time.

That's why you need an article like this one.

Here we look at how a few differences in the rules of this Casino favorite can turn a game of luck in one where you stand no chances of winning. 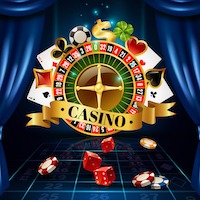 Play with the BEST Odds!

Play Roulette games with the best odds of winning - online!

Activate the bonus on signup and place your first bet!

Roulette, perhaps because of its sheer simplicity, has long been a mainstay of Casinos.

With its origins thought to come from 18th-century France, and said to be an unexpected by-product of attempts to build a perpetual motion machine, Roulette has been around for a long time.

In essence, players bet on a number and a color. Then, then a ball is deployed by a Croupier onto the spinning wheel, in the opposite direction to the spin.

When the wheel stops spinning and the ball comes to rest on one of the numbers, the winner becomes known - if there is one.

You'd think this must be one of the simplest Casino games to play, and you are right.

The problem is that Roulette has become a 'global' Casino game — and some details changed as soon as it god adopted in different countries.

There are now many versions Roulette you can play online and at brick-and-mortar Casinos. Choosing the right (or the wrong) one carries huge implications for you.

The most important difference between American and European Roulette is the number of zeroes on the wheel.

Both European and American Roulette have 18 black and 18 red numbers. However, the American version, rather than having one green number, 0 ('zero'), like the European one, has two of them.

While this doesn’t affect the amounts potentially being paid out to the winners, it does affect the house edge.

So much that the house advantage nearly doubles when you decide to try your luck on the American Roulette and its double-zeroed Roulette wheel.

From 2.7% on a European wheel, the house advantage rises up to a far tougher-to-crack 5.26% in American Roulette.

To complicate things, American Roulette has become the standard at the majority of mainstream Casinos around the world.

That's exactly because its increased house edge, which means that players at the table are likely to lose more of their money (and faster) than if they played European Roulette.

This might sound unfair at first. But Casino players love to play Roulette and Casinos know it well.

And since not many players know the differences between American Roulette and European Roulette…they exploit this ignorance!

In other words — if you play to win, go for a game of European Roulette. Our friends at LVBet Casino are the best in the game and offer you all you need to play with good winning odds.

In some forms of European Roulette, it is possible for players to make a 'call bet', meaning they announce their bet without putting any money down on that turn.

This practice isn't common in the UK but it's widely accepted at most European Roulette games in Europe. It's a good way to speed up the action and play more.

The American Roulette has no such option, although it does have the 'five numbers bet'.

This is a bet for the brave (or the desperate), where players put their money on five consecutive numbers, namely 0, 00, 1, 2, and 3, with a win if the ball lands on one of the numbers.

There are only 6:1 odds of winning this bet, and the house edge is increased significantly, so this is not a bet for the Roulette player to take lightly.

This, as the name implies, comes from the French origins of the game, and allows the player to reclaim half of their wager if the ball stops on 0 on a European Roulette wheel.

By allowing this, European Roulette becomes an even more amenable experience, with the house edge even thinner, at 2.7% if 'En Prison' is allowed, and far behind American Roulette.

Which Version Should You Play?

With the European Roulette, thanks to the Roulette wheel layout, the odds of winning are 37:1, while American Roulette has odds of 38:1 thanks to that extra number.

In both versions of the game, players will get a 35x multiplier on their wager when they win, as it’s a 35:1 ratio for wins.

My advice is to play European Roulette, if you like to win money.

If you have the opportunity to choose — always choose European Roulette games. These are the ones where you are most likely to win.

And if you want to play online, have a look at this website.. A free gaming account gives you access to lots of games, including the best ones of European Roulette money can buy!

Get a free account to play all the best Roulette games online — with a bonus!

Open the European Roulette table and use the welcome bonus to place your first bet.