The Best Jacks or Better Strategy to Improve Your Winning Chances 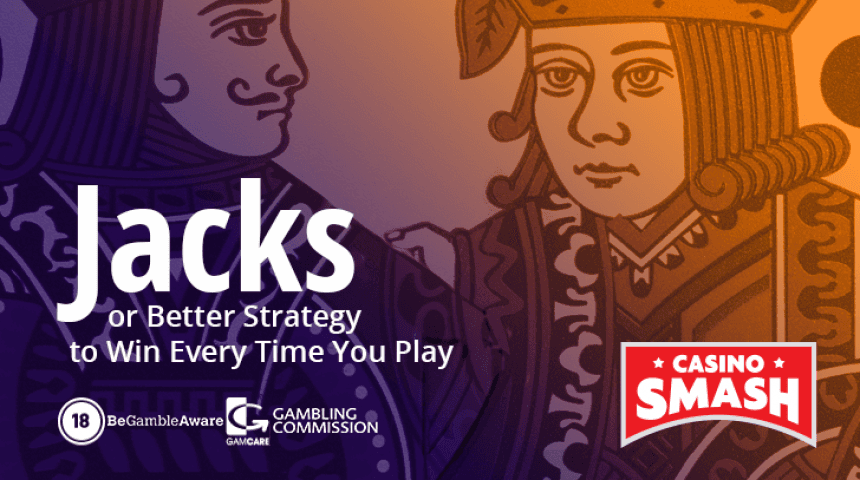 You know that video Poker is one of the games with the best odds — but can you really say that you know the ins and outs of the best video Poker strategy to improve your chances at Jacks or Better?

In this article, I am going to show you how to maximize your winning chances at video Poker and how to use the best Jacks or Better strategy to get the most value out of your cards.

The video Poker strategy tips on this article are not a surefire way to win at Jacks or Better.

Remember: Jacks or Better video Poker, like all the other games of its kind, is a gambling game.

As such, the house has always an advantage. With the right Jacks or Better video Poker strategy, you can reduce that advantage to a minimum and increase your chances to win.

Why Play Jacks or Better

Video poker is one of the most entertaining games one can play at a Casino — but if you think that's what makes the Jacks of Better variant as popular as it is today, you are wrong.

Video Poker happens to be also one of the Casino games which offer players the best return.

Why is video Poker so good for the players? When you play using the video Poker optimal strategy, on a full pay game, you can have an expected return of up to 99.54%.

Let's start from the very basics of the Jacks of Better strategy to understand how to play Jacks or Better video Poker and improve your chances to win.

Only once you know the very basics of the game you can move to learn more about the various hard strengths in Poker.

Are you a Poker player? If so, this might sound quite obvious to you. Just don't forget this is a guide to the Jacks or Better video poker strategy for beginners.

The goal of a game of Jacks or Better video Poker is to end up with the best 5 card poker hand possible.

To do that, even before we jump on the optimal strategy and the best ways to play Jacks or Better video Poker online, you need to be familiar with how are the hands ranked in Poker.

Want to win more? Play a Full-Pay game of Jacks or Better!

In a full-pay game of Jacks or Better, you win 2x your bet when you hold two pairs.

You should always look for full-pay games. Not only these come with larger prizes, but they have exactly the same RTP of the other games.

Many online Casinos do not specify the differences between their full-pay games of Jacks or Better and those that are not full-pay as they hope you'll choose what's best for them and not what is best for yourself.

To find the best full-pay games to play online (with a bonus), follow this advice:

A good video Poker strategy is all about taking actions that have the best possible expected rate of return. Obviously, you can't beat video poker in the sense that you'll win every time you play. That's not possible and it is not going to happen.

The game of Poker revolves around the probability of certain outcomes coming to fruition.

Understanding the odds of these outcomes in various situations is how professional Poker players gain an edge in the games they play.

Playing with the Jacks or Better optimal strategy allows for no mistakes and demands the strictest level of discipline.

A pair of Jacks or Better is the lowest winning hand in this game of video Poker. When you hit a pair of Jacks through to aces you win your money back

How to Play a Low Pair

The low pair is the most improvable hand you can be dealt with in a game of Jacks or Better video poker.

How you play in these situations will determine how close to optimal Jacks or Better video poker strategy you will land.

Most of the time the decision to hold onto a low pair is obvious. There are times however where certain possibilities are available and players get so greedy...they make mistakes.

These mistakes are what separates the winners from the losers.

Below you find some real-life example where, even though it would tempting to go for a big score, you should hold onto your pair and seek to build upon it.

When to Break a Low Pair

Conversely, there are situations where the best Jacks or Better strategy to win at video Poker shows us that breaking a low pair is profitable over the long term.

When to Keep a High Pair

A pair of Jacks or Better in video Poker constitutes a winning hand and you are guaranteed to get your money back.

Most tutorials advise that you should never break a high pair and for the most part, they are correct.

Below are some real-life situations where you may be tempted to break a pair of Jacks or better, in search of a bigger win.

However, the Jacks or Better optimal strategy demands a disciplined approach of holding onto what you already have.

There is one situation where Jacks or Better video poker optimal strategy indicates that players should break a high pair. When you hold a high pair with four to a royal flush you should break the pair and look to hit the 1 card that will pay off huge.

When most players are dealt a winning pat hand such as a Straight, a Full House, or any form or Flush, you should hold all your cards and take the win.

This is correct for the most part. However, you will leave some edge on the table unless you make the following adjustments.

Although this may seem crazy, it happens to be backed up by solid math around the probability of certain outcomes occurring.

Playing Jacks or Better video poker in an optimal way maximises your expected return as a player.

It takes extensive practice to understand each situation and the relevant action necessary to play perfectly.

You should employ the use of a Jacks or better strategy trainer to test yourself and practice your play.

The more efficient you get in making these decisions to faster you will start to play at an optimal level.

The main concept behind playing video Poker profitably is discipline.

The math is clear around the probabilities involved with certain outcomes and all that is left is for you to make decisions on your actions based upon those probabilities.

Using statistics is always the right move. Learn to rely on numbers rather than on emotions, and you'll become a better player right away.

Can You Identify The Best Strategy to Play Pai Gow?

How to Play 3-Card Poker at a Casino