How the Odds in Craps Are Calculated 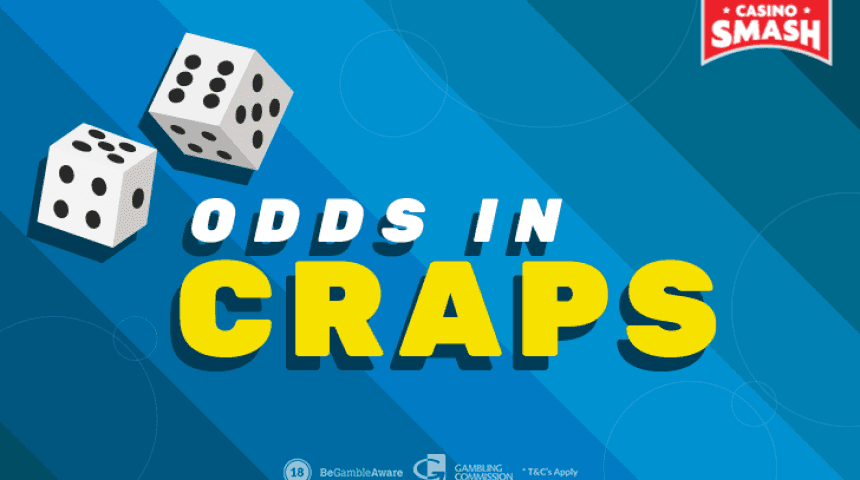 There’s something you should keep in mind while playing Craps and other Casino games.

Whether you gamble online or at a land-based Casino, always look at the odds before placing a single bet.

And if you want to play Craps, well...you really need to do your research.

Because Craps odds insanely differ depending on what kind of bet you make.

Check out all the best Craps games online for free and for real money.

Use the bonus to start and follow the tips on this article to win your games of Craps!

While it is true that all bets in Craps will have a house edge, there are some that only have a house edge of around one percent, while other bets could be disastrous, jumping to almost a staggering 17 percent.

It’s obvious which odds in Craps you should focus on.

And that’s precisely what you’re going to learn in this article.

The Best Craps Odds: How to Play Efficiently

Whether you have dabbled in the game of Craps or are looking to play the game for the first time, it is important to understand the math behind the game and how the odds in Craps are calculated.

After all, there are many bets that are much better odds-wise for you to wager on than others.

Before we get into which bets are great to make and which ones you should avoid, it is important for you to understand some basic math about the frequency of certain dice rolls.

As you probably already know, in Craps the person rolling the dice has just two dice each with six different combinations of the numbers one through six.

The odds of rolling a certain number on any particular one die roll is one of six, since there are six different values.

If we multiply this by two dice, there are 36 different dice rolls - or six times six - that can possibly turn up.

The roll that will come up the most often in Craps is a seven with odds of one in six or five to one, and here's why.

Regardless of what comes up on the first die, you will have a one in six chance of hitting a seven on the second roll.

This holds true regardless of what appears on the first die.

The odds of rolling a six or an eight are equal, but will come up less frequently than a seven.

This is due to if the first die is a six, it will be impossible to hit a six with the second die since the minimum value is a one on any die.

Likewise, it will be impossible to roll an eight if you roll a one on the first die since the maximum number on any die is a six. This makes the odds of rolling a six or an eight occur one in every 7.2 rolls giving you odds of 6.2 to 1.

As we branch out a bit, the odds of hitting certain numbers are higher.

Figuring out how often a two or 12 will appear on any Craps roll is easy.

For a two, you will need to will need both dice to come up with a one showing, or a one in 36 chance.

The math here is just multiplying a one in six chance that you will be rolling on the first die, with the same odds of you doing so on the second die. The same math holds true for rolling a 12, but instead of ones on each die, you will need a six to appear.

The Odds in Craps Table

Here is a look at all the odds of rolling any particular number on a single roll in Craps.

Now that we got the math of how often certain rolls will appear out of the way, let's talk about the best and worst bets in Craps.

First of all, you should avoid (at all costs!) to ever wager on any seven bet.

While it is true that this roll will come up the most often, due to the odds most Casinos offer, you are giving away a house advantage of 16.7 percent every time you wager.

In other words, if you wager $100 on this bet over the course of a session, you should expect to lose $16.70 on average.

Other bets to avoid are any hard-way bets.

These bets are often attractive due to the high odds they offer. However, the house has a huge advantage of 9.09 to 11.11 percent on these bets.

Similarly, you should avoid betting on rolling a two or twelve since these bets give away a huge 13.9 percent house advantage.

As you now know what bets not to make, let's look at what you should be focusing on when betting on Craps.

You should always be focusing on betting on the pass or don't pass lines due to a negligible house advantage of 1.40 and 1.41 percent respectively.

And if you want to put all of this knowledge to practice, feel free to open a free Craps game and play for fun - until you’re confident in your skills.

AUTHORGiovanni Angioni
BioPolitical scientist, and gambling expert, I have spent the most part of the last ten years writing about the casino and poker industry. As a professional journalist, I work with FOX News, La Repubblica, the Economist, Politico, and PokerNews. As a gambler, I won money pretty much anywhere in Europe. As a gambling editor, I'll help you do the same.
Toggler
Contents
The Best Craps Odds: How to Play EfficientlyThe Odds in Craps TableRelated News
1. The Best Craps Odds: How to Play Efficiently

Craps Strategy: Can You Improve Your Chances to Win at Craps?

Is There an Algorithm to Win at Roulette?

The Best Jacks or Better Strategy to Improve Your Winning Chances!

Baccarat Betting Systems: How to Improve Your Chances at Baccarat