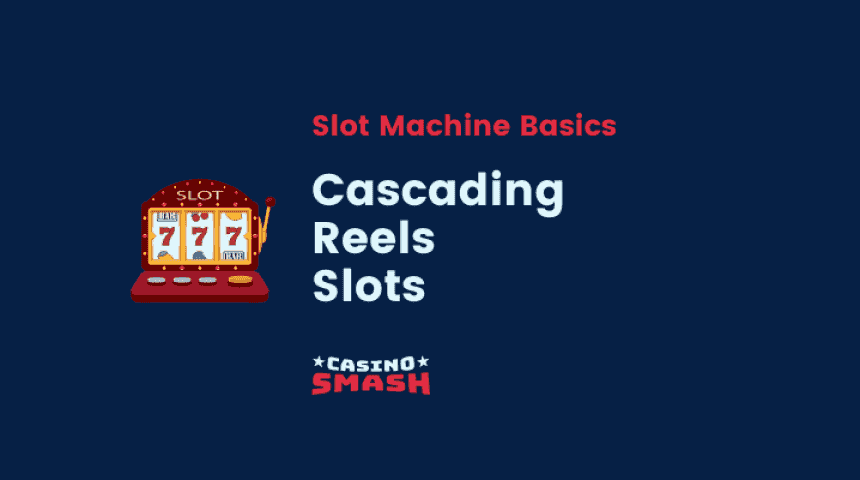 Cascading slot machines are also known as tumbling reels, rolling reels, or avalanche slots. Cascading slots use a grid of symbols instead of standard reels to entertain the players with a unique game aesthetic.

What Are Cascading Slots?

In cascading reels slot, new symbols tumble down the grid to fill the space when old matching symbols burst or disappear after making a winning combination, sometimes creating a cascade of wins for the player.

Having been popularised in the slots gaming world since a long time ago, there are now plenty of cascading reels games, from classics like Pixies of the Forest and the Da Vinci Diamonds to the more modern Megaways slots, like the Big Bad Wolf slot.

On this page, you’ll find the best slots with tumbling reels, which includes the likes of Gonzo’s Quest, Raging Rhino, and Bonanza, along with the strategies that you need to know to play cascading slots.

The cascading reels feature can lead to many wins in the same round, which remarkably distinguishes these slots from other video slots. In addition, cascading slots with high RTP are like cherry on the cake. Hence, we curated our list of best slots while considering the best features and payouts in mind.

Among slots, Gonzo’s Quest: The Search for El Dorado is legendary. Gonzo's Quest has been a mainstay among the most popular slots in the US since its release in 2010 and is widely known for its tumbling reels or avalanche feature.

The storyline of this slot revolves around Gonzalo Pizarro who treks through the Amazon Jungle to find El Dorado, the lost city of gold.

When you form a winning combination on the tumbling reel, the winning symbols disappear and replaced by new symbols. The consecutive clearing of symbols rewards you with progressive multipliers of x1, x2, x3, and x5.

Matching three or more bonus symbols triggers the Free Fall bonus feature rewarding you with ten or more bonus games/free spins. In addition, the value of each multiplier gets tripled during this round.

With 95.97% RTP, and medium-high volatility, this slot is one of the most influential NetEnt slots.

Created by Big Time Gaming in 2016, Bonanza is the original Megaways slot. It is set in the Wild West theme and completely disrupts the natural order of shapes and sizes of symbols seen in video slots usually.

The Wild Dynamites substitute all the symbols except the scatters. If you land four gold scatters, you will be awarded with twelve free spins. This is a high volatility slot with 96% RTP, and consists of 6-reels and 117,649 paylines.

This classic slot introduced the Vegas audience with tumbling reels feature, and was released as an online slot in 2012 by IGT. It has 5x3 grid and 20 paylines.

Da Vinci Diamonds slot illustrates some of the best paintings from the Leonardo Da Vinci including Mona Lisa. In addition, the slot has gemstones symbols in various shapes and colors, wild symbols with a pink gemstone, and the Da Vinci Diamonds and bonus symbols.

If you match five wild symbols on the reels, you will be rewarded with 25000 credits, which is the maximum jackpot. Gathering three bonus symbols on the screen will trigger free spins feature or six free spins, during which you can make more winning combinations or re-trigger the bonus game.

Released to online casinos in 2015, Raging Rhino from WMS quickly became one of the most popular slot machines. However, it’s the 2019 cascading reels feature release that positioned Raging Rhino Megaways among the top slots here.

This high volatility casino game still hinges on the wild multiplier Serengeti, the Diamond bonus round symbol, and, the famous slots symbol of the Raging Rhino itself.

The winning combinations in this slot can be found across as many as 117,649 paylines, and further matching symbols make way for new symbols, which further triggers free spins and bonus rounds.

Jammin’ Jars is an eight-by-eight grid slots game from Push Gaming. The wins come in the form of clusters of symbols, moving away from the standard format of paylines that most slots rely on.

After each win, the fruits symbols fall to make space for more symbols. The wild Jammin’ Jar is the main symbol that builds up a multiplier whenever a winning combination is formed. It remains on the grid for the re-spins while shifting from down to up or left to right.

This slot is another creation of Play’n Go and a sequel of Reactooz, which is quite popular among the slots players. You can win max up to 5083x time of your bet in this slot game.

Reactoonz 2 is played on a seven-by-seven format. When five or more matching symbols land next to each other in a cluster forming winning combinations, they burst for more symbols to fall on the cascading reels.

The one-eyed and two-eyed icons work as low and high paying symbols. There can be up to fifteen symbols involved in a win. When one-eyed symbols fluctuate their eyes and become a part of winning combination, they create an electric wild randomly on any spot of the exploding symbols.

When two or more electric wilds appear on the reels and trigger the Wild Pair Explosion, but don't pay out rewards, the Quantometer gets charged and brings in supersized Energoons and Gargatoons as extra wilds in the game.

Who Wants to Be a Millionaire

You don’t need to be a whizz at general knowledge to play the Who Wants to Be a Millionaire slot game – you only need to know how to play slots.

This slot is based on the classic game show of the same name, which Big Time Gaming has adapted it into a Megaways slot.

Along with the cascading reels feature, the bonus round is the main attraction of this game. When you enter the free spins bonus round, and select A, B, C, or D in an attempt to get up to 50 free spins, the three help options guide you to make the right choice each time.

Monopoly Megaways is a spectacular creation of Big Time Gaming. As obvious it may sound, the traditional board is integrated with the rolling reels in this slot. It is a highly volatile game with 96.50% RTP.

The encrusted golden M works as the wild symbol here. When you own five houses on a street, the bonus free spins feature will be triggered for you. There are no scatters in this game.

The rolling reels feature is still core to the bonus spins, with wins resulting in free spins and moving the Rich Uncle Pennybags to new properties. The free spins increase by the number of streets with five houses or railway stations that you own.

During the free spins feature, the Rich Uncle Pennybags keep moving on the board, while adding multipliers and new properties on the way.

If you want to play a cascading slot with a Chinese theme, Temple Tumble Megaways is a perfect option. It’s not as laden with lucky gold symbols as many slots are, instead the reels are being flanked by a Guardian Lion and Tengshe Dragon.

The golden Buddha symbol is the most valuable symbol, while the explorer who is searching the treasure in the jungle acts as the wild symbol.

The wild symbols exist on reels two to six and substitute for all other symbols. Matching symbols on three or more adjacent reels will constitute a win.

Temple Tumble Megaways is one of the best tumbling reels slot games to play in the grid format. The stone blocks that lie next to winning symbols will explode and new symbols will fall down to fill the space and create more chances to win.

This slot comes with various bonus features, such as free spins, multipliers, and re-spins. Clearing all stone blocks will trigger six free spins.

Moon Princess is another Play’n Go title to make it in our list as one of the top slot in a stack of Megaways-boosted Big Time Gaming slots with cascading reels. It is evidently based on Sailor Moon⁠, the anime series and set in a five-by-five grid.

Matching three or more symbols in the grid either horizontally or vertically charges the Princess Trinity Meter, which further activates free spins, re-spins and multipliers. You may also get a chance to choose the number of free spins and grow the multiplier to a maximum of x20.

Like other slots of this build, the cascading reels come into play when cluster wins pop on a single spin, with each matching combination making way for more prizes until the spins expire and symbols stop making wins.

The trio of Love, Star and Storm use their magical abilities to help you win an outstanding prize when all the 25 symbols are cleared from the grid during the free spins feature.

Yes. These slots have a cluster payout feature, which is quite simple to fathom. If you have ever played Candy Crush, you will relate with the concept of cascading reels even better. Matching three or more symbols that are lying adjacent to each other or from top to bottom on a grid will lead to a win, which can further trigger bonus features to multiply the winnings.

It is always advisable to try the demo version of cascading reels slots to understand the gameplay and payouts before you start playing for real money.

How do Tumbling Reels Work

In tumbling reel slots, if a spin yields a winning combination, the symbols burst to potentially make way for more symbols to fall in place and create more combinations triggering spins, free spins and activating multipliers. In other words, these slot games give you an extra chance to win through the tumbling reels feature.

When you play tumbling reels slots or cascading reels slot games, you will notice that these are very similar to standard video slots in terms of operating through a spin button and giving you an option to place your bet, but the difference lies in the dynamic gameplay along with successive and substantial wins through multipliers that you can achieve quite often only on these slots.

Where Can I Find Tumbling Reels Slots?

The online casinos that we have listed below have the best cascading slots games. Furthermore, all these slots sites have been tested and reviewed to ensure that they are safe, licensed in the US, and offer a good welcome bonus.

Oops. No rooms were found..

Before you claim a bonus at a site with cascading reels slots, it’s never a bad idea to try free cascading slots. This way, you can see the gameplay, and decide whether you want to play slots with rolling reels feature or not.

Cascading reels slot machines are all the rage right now offering the chance to win on top of a win.

How to Get Fully Cashable No Deposit Bonuses (2022)

Gillian Mercylin
We are CasinoSmash – an expert guide about casino, and our experts will only help strengthen your knowledge. We can help you bet safely by providing strategies, pro tips, and honest reviews about the best licensed and regulated casinos available. In addition, we also find the latest bonuses, promotions and free spins for new and existing customers so you don’t have to.
Our Associates:
This site is 100% for entertainment purposes only and does not involve real-money betting. Please gamble responsibly. Call 1-800 GAMBLER in the U.S, 1-866-531-2600 in CA, or visit begambleaware.org in the UK for help. You should be 21+ in the U.S., 19+ in Canada, and 18+ in the UK to participate in sports betting and iGaming.
© 2013-2022 CasinoSmash.com