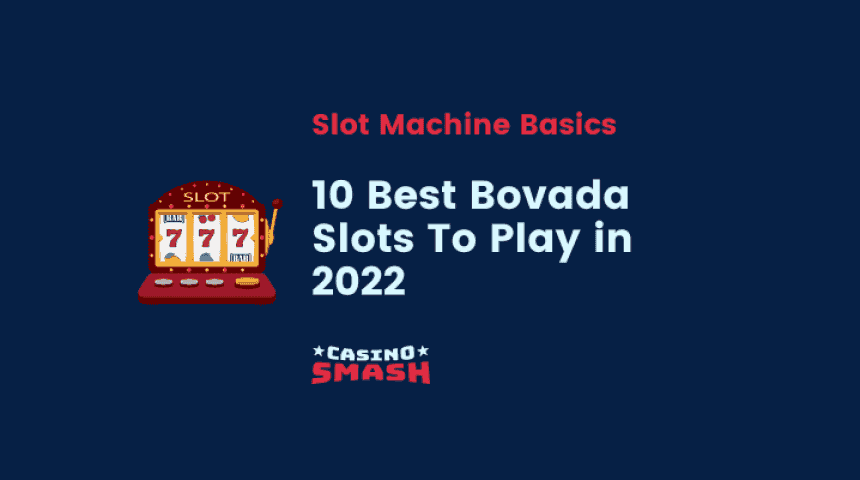 Bovada is an online casino that’s popular among Americans despite not currently having a US gambling license. Previously licensed by the Kahnawake Gambling Commission, this site now operates on an offshore basis and reportedly still allows Americans to open an account.

What are the best Bovada slots currently available? We tested their slot game offer to identify the best ten games on the site's portfolio. As typically the case is with any online casino, their selection of slots is wide and some have progressive jackpots as well.

⭐️ Why Did We Choose These Games?


After playing looking at the Bovada slots offered on the website, we feel that the titles below best represent their casino and cover a range of entertaining themes and features.


With this in mind, we also need to stress that we do not support Bovada Casino, nor we suggest players to register and play on this website. We strongly believe in online gambling regulation and we advise players to join only licensed sites that offer access to secure and fair games.


If you are interested in slots, here's an offer you may want to consider:

► Special Offer: Get a Free $50 bonus to play slots online! (No deposit required)

This online slot game is one of the most popular Bovada slot machines. It’s a proprietary game and doesn't come from a leading slots developer like NetEnt slots, so you won’t see it elsewhere apart from Bovada and its sister sites. There are six reels, and the symbols on them include eagles, buffalos and wolves. The gameplay takes place inside a tent, with a pot on a campfire and a rugged desert background. Golden Buffalo pays out a win if you match icons from left to right on an adjacent basis, and it pays out in 4,096 ways.

The wilds can come stacked, while scatter symbols award free spins, going from eight free spins for three scatters, up to 100 no-cost games if you land six scatters at once. When wilds take part in a win on the free spins round, a multiplier is added to the prize. The slots RTP doesn’t appear to be mentioned on Golden Buffalo, but some sources suggest that it’s 95%, with a high level of volatility. You can bet from $0.40 to $200 stake on each spin.

2. A Night with Cleo

The popular game theme seen on Egyptian slots has been also used in this proprietary game in which progressive jackpots can be claimed. It has five reels with many of the typical Egyptian symbols such as scarabs and the Eye of Horus that we see on numerous slots. Cleopatra herself is the wild and she doubles any win when she appears in, while diamond rings add to the glamorous style on show.

Three or more scatters are needed to trigger a round of 15 free spins. All wins in this bonus round are tripled, except the Cleo symbol which is the game’s most valuable image. Free spins can be re-triggered for up to a total of 180 spins. There are 20 paylines, and a progressive jackpot that is awarded randomly. RTP figures are somewhere between 90% and 92.5%, but they aren’t confirmed in the game itself. So, it’s a highly volatile game with the min stake at $0.20 and the max coming in at $200.

In the next of the Bovada slots on our list, we can see Mythic Wolf from Rival Gaming. It’s one of the best slot games on the site, with a wildlife theme including symbols such as a wolf, a feather, and a full moon. The symbols appear over five reels and three rows, with 50 paylines, so a normal online slots strategy can be adopted here.

This slot’s wilds feature a wolf and add a 5x multiplier when they help to complete a winning line. A feather acts as the scatter icon and awards a free spin round between seven and 50 bonus games when you grab at least three scatters. The RTP of Mythic Wolf is 94.88% and you can stake between a minimum bet of $0.01 and a maximum bet amount of $125 on the game.

If you want to play slot games with retro reels slots and progressive jackpots, then you might like 777 Deluxe. Five reels feature a variety of juicy fruits and BAR symbols and there are ten paylines that you can build winning combinations on.

When you play on Bovada slot machines, you can set your stake as low as $.020 or up to $100. The mystery symbol is a question mark and with three of them the bonus game is launched. This round is played with just three reels and has prizes up to 50x. On this progressive slot, you need three golden 7s when playing the bonus games to claim the progressive jackpot. The RTP of 777 Deluxe slot game is 96.18%, which puts it just below the best high RTP slots.

The next on our list is Genesis Island by Genesis. It’s based on the theme of dinosaurs and giant apes fighting on a tropical island. Its layout has five reels and three rows, which have 20 paylines spread over them.

Free spins can be earned when playing for real money, with the scatter symbol awarding them. As for other bonuses or features, a wild completes wins where possible and you’ll also see that Mega Reels can be created when two or three of them combine. The RTP isn’t confirmed on the rules page. The minimum wager is $0.20 and the maximum is $40.

Raving Wildz is another slot that you can play for real money or just hit the spins for fun at Bovada. Developed by Radi8, it’s based on a five-reel format with 50 paylines and the key symbols include funky dancers, speakers and the DJ’s turntables.  Like most slot machines, it has wild symbols, which come with multipliers that can add up to 81x in a single line.

The bonus round gives you 10, 12, or 15 free spins, based on the number of scatters you get. During this round, more wilds can land on top of existing ones and stack up. The RTP isn’t stated in the paytable information. Bets can be placed between $0.50 and $250.

Set up in the style of a car-racing adventure, the proprietary slot titled Fast & Sexy has a set of reels that look like the tires on a sports car. The top-paying symbols on this slot game are female drivers, while the lower wins come from playing card symbols with exotic destinations written across them. There are 20 paylines and the maximum amount that you can win in real money is 2,500x your stake.

An expanding wild on the third reel stays in place while triggering a free re-spin on the others. When you play this game, you can earn ten free spins, which are handed out when you get three scatter symbols anywhere on the screen. Three bonus symbols are needed to enter the bonus round, where you can win up to 300x your wager. Bet sizes can run from $0.20 to $200 but like some of these Bovada slots the RTP isn’t confirmed in the game’s information pages.

Gold Rush Gus is based on a gold mining theme. It has five reels with gems, numbers, and letters making up the majority of the symbols. As with most online slots, here too a wild symbol gives you more chances to win, as it replaces any paying symbol to complete winning combinations.

You need three versions of the sign marked as ‘free spin’ to grab entry to this bonus round. A couple of the key symbols appearing at once leads you into the Treasure Chest feature. This video slot has ten paylines and the maximum prize possible is $6000, making it one of the best slot machines on this site in terms of the top cash rewards. The minimum amount of money you can stake is $0.20 and the top figure is $100, similar to many other slots.

A crazy superhero is the star of this video slot from Revolver Gaming. The five reel layout features a variety of characters and you can either choose real money play or just for fun game. An RTP of 95.98% is mentioned in its paytable, and you can score cash prizes across the 20 line format.

In terms of slots bonuses, free spins include pre-expanded wilds, while the Mystery X-Ray Bonus Game gives you the chance to choose symbols to earn multipliers. Bet in the range between $0.20 and $200 on Multiplier Man, which is a medium volatility game compared to the average slot machines. You can try it on a phone, or a desktop device.

Good Fishes from Revolver Games is a 30 payline slot game with stacked wilds and bonus spin round among its other listed features. The wild is the highest-paying icon, which pays at 33.3x your bet, and also helps to hit more wins by filling in for other paying symbols.

The RTP paid on Good Fishes is 96%, which is fairly average for online slot machines. When you get three or more scatters, you get to enter the round known as Frankie’s Fishmonger Bonus, where you can choose from the six possible bonus rounds and win money. Bets from $0.30 to $300 are accepted when you play on this slot.

Bovada is one of the large online casinos that can be played on a desktop computer or a mobile device. Their account rules cover a range of payment methods including cryptocurrencies like Bitcoin and Bitcoin Cash. As well as the Bovada slot games we’ve looked at here, Bovada offers live dealer games and sometimes has special offers for new players making their first deposit.

⚠️ CasinoSmash does not recommend to play online slots on Bovada. We have reports of this website offering real money gambling games to US players despite it being an off-shore and unlicensed operator.

If you want to play the games with free bonuses on safe websites, check out this list of US casinos online. on CasinoSmash.

You can also check some of the best online slot websites for real money games that we recommend.

AUTHORPayal Tyagi
BioA passionate writer who likes to play games at casinos online and live. While I have worked for the last four years in FinTech, EdTech and Digital Marketing industries, I wrote many high-quality reviews for games on various websites, which also gave me the idea to work in this industry and explore more.
Toggler
Contents
Best Slots on Bovada CasinoAbout BovadaRelated News
1. Best Slots on Bovada Casino

What Is a Wild Symbol in Slot Machines?

What Does Volatility Mean in Slots?

What Is RTP in Slots?

Advantage Play Slots: How to Use It to Win More Online